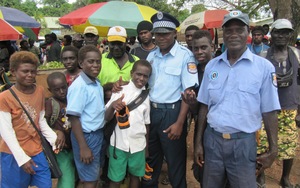 Radio New Zealand  and RADIO Australia are reporting  that an advisor to the autonomous Bougainville government says Papua New Guinea’s national leaders will likely set the date for the Bougainville referendum on independence.

Anthony Regan  (pictured above) says there’s been relatively little focus among PNG’s national politicians on the approaching window for the referendum, which is to be held between 2015 and 2020.

“And as that date has to be agreed between the two sides, Papua New Guinea can effectively set the date as late as it likes up until 2020 so I think there’s a sense in Port Moresby that that’s probably what will happen. Although Bougainville can of course request an earlier date, it’s most likely that it’s going to be late.”

Anthony Regan was in New Zealand last week to give a lecture on Bougainville at Victoria University.

He says as Bougainville moves into this critical phase, there will be a need for considerable help from the international community over the range of complex issues that need to be negotiated with PNG in this phase