“This Sunday 16 August on Channel 7’s 6pm bulletins in Australia there’ll be another Mark Donaldson VC special report featuring Bougainville and New Britain. It’s on the shooting down of Admiral Yamamoto. We trek into the wreck deep in the jungle near Buin and trace Yamamoto’s stronghold from where he took off that fateful day. There’s some amazing archive, from the Americans and the Japanese, including Rabaul footage never aired outside of wartime Japan.”

This assignment is to mark the 70th anniversary of Victory in the Pacific (VP) with two news features in PNG which was the forward base for Japanese forces during WW11.

Our reporter is Australia’s Victoria Cross recipient Mark Donaldson VC, who has previously filed history features or channel 7 from France and Belgium. Mark is a real history buff and has a deep, abiding interest in all aspects on military history. The producer is Max Uechtritz and the cameraman is Tim Stewart.

The story will be a news feature on how Admiral Yamamoto – Japan’s architect of the attack on Pearl Harbour and navy fleet commander sometimes based in Rabaul – was shot down over Bougainville. 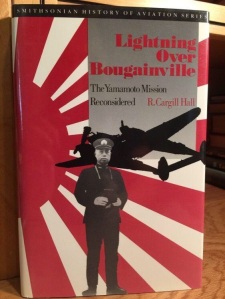 In one of the most secret and successful code breaks of the war, the Americans had intercepted a radio message detailing Yamamoto’s flight coordinates. In a massive blow for the Japanese wear effort,  US fighters shot him down and his plane wreck lies near Buin on Bougainville.

“The plane is still sitting there in the jungle. But at the moment, the people there have made gardens close to the site,” Zhon Bosco, owner of Bougainville Experience Tours, told Pacific Beat, adding the area was being cleared.

“We’re having a lot of inquiries, people are already booking with us to see the site. But most of them haven’t confirmed the dates to come in.”

Interest in the war strategist and Japanese navy commander is as strong as ever, particularly among the growing number of Japanese tourist travelling to the Pacific to learn more about their military past.

“For Japanese people, it’s one of the most significant World War II history sites around,” Mr Bosco said.

He said visitors would not be deterred by the long travel time or land disputes surrounding the crash site.

“We have a network with the locals. For Yamamoto crash site, we have connection with them so every time when people want to go there, we tell them there are people coming in, so they prepare themselves,” Mr Bosco said.

“I think people coming here, they will not have any problems with security.”

Yamamoto is remembered for his role in the attack on Peal Harbour in the US, which left more 2,400 Americans dead and another 1,000 people injured.

Photo: A photo of Japanese admiral Yamamoto-Isoroku, best remembered for his role in the attack on Peal Harbour in the US. (Supplied: Wikimedia Commons/Government of Japan)

“He remains a hero in Japan today.”

Yamamoto was instrumental in planning the attack on Pearl Harbour, which was not a strategic priority of the Japanese navy until he agitated for it.

“Here’s a man who thought he knew the American psyche. He thought that by — putting it simply — sinking a few battleships that he would shock the Americans into a negotiated peace,” Mr Stille said.

“Of course the exact opposite thing happened. Had the Japanese stuck to their strategy, perhaps occupying the Philippines on their way to Malaysia and Singapore, and the areas down south, that they had to have for the oil they needed to break the US embargo.

“Had they done that there would have been a different US reaction.”

Yamamoto was shot down after American code-breakers found out he was planning to visit troops stationed off Bougainville.