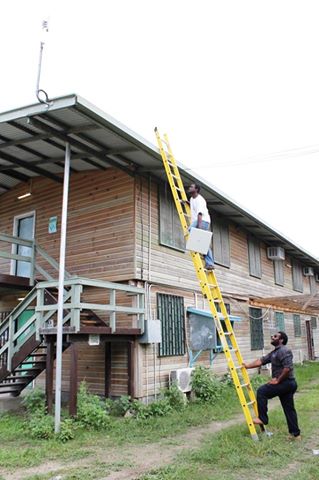 Two years ago, a pair of Bougainville public servants sat under a shady tree in Buka, working on a plan that would transform the autonomous region’s developing bureaucracy.

The men represented the Autonomous Region of Bougainville’s information and communications technology division.

Picture above : Kakarouts and Rapula Jnr putting up a downlink at the Division of Commerce and Trade Industry office, Buka

Their task was to design a computer network that would enable the region’s bureaucracy to more efficiently communicate with itself, and the outside world.

Now, more than 300 Autonomous Bougainville Government users in 18 buildings have access to email and the internet for the first time at work.

The project is supported by the Governance Implementation Fund (GIF), a joint initiative of the Governments of PNG, Bougainville, Australia and New Zealand.

It gives Bougainville’s public servants from a range of departments the ability to communicate with each other, and access information on issues like agriculture and finance.

“Once it was setup, there was an influx of people wanting to connect to the ABG network – everyone saw the need to have and use email,” network engineer Jamaine Kakarouts said.

He said public servants had taken rapidly to the new system, and the ABG was now moving from paper-based to digital records keeping.

The GIF supported the Information Communications Technology division with equipment, transportation and infrastructure.

The ICT division provides a range of services including maintenance, network setup and hardware and software installation.

Enhancing the capacity of the ICT division is cost-efficient and effective, according to the ICT team.

“The Education Department have come to us to use our network because it is reliable,” Kakarouts said.

“Our next priorities are to focus on maintenance, staff training, and expanding the team to support ICT in Arawa and South Bougainville,” Rapula Jnr said.