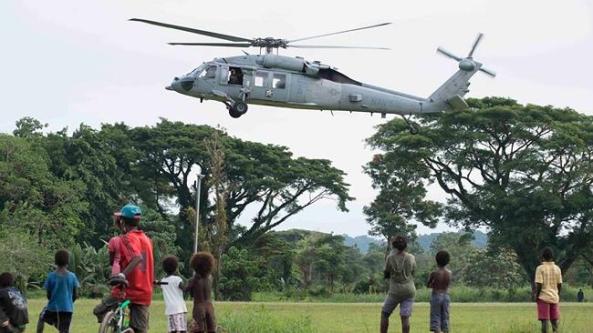 China’s constructions on ­reclaimed rocks in the South China Sea are a headache for ASEAN, the US and Australia, what if Beijing became the patron of Bougainville a large emerging island state that stares across the ­Pacific to the US fortress of Guam?

Rowan Callick Reporting in THE Australian

Earlier this year 130 operations were performed on the US Navy hospital ship Mercy. Its nurses, dentists and optometrists saw more than 6000 patients and its veterinary surgeons treated 140 dogs and cats and more than 2500 farm animals, during a two-week stay in Bougainville and in Rabaul, also in Papua New Guinea.

The US’s Pacific Command is a massive deliverer of humanitarian services every year around the Asia-Pacific. And Bougainville, an autonomous region of PNG, is a worthy recipient.

Conditions have deteriorated on the island, which after boasting the best living standards in PNG before civil war broke out in 1989 is now one of the nation’s worst performing provinces, with few job prospects and poor health and education levels, even for a country languishing at 157th of the 187 nations on the UN human development index.

But there is another, strategically potent, reason why the US might well wish to pay particular attention to Bougainville. That’s because within five years its 250,000 people will go to a referendum on independence and Bougainville, with deepwater ports and lengthy runways that could be swiftly rehabilitated, lies 2500km straight across the horizon from Guam.

PNG Prime Minister Peter O’Neill recently told The Australian a “yes” vote would not necessarily lead to independence, which remained the responsibility of the national parliament.

“We have a diverse and tribal country, so we can ask ourselves, where does it stop? We have no ­interest in thinking about independence, but about services, and the wellbeing of the people on Bougainville,” he said.

Nevertheless, the odds are strong on Bougainvilleans opting for independence. An independent but economically struggling Bougainville would be forced swiftly to seek patrons. The Autonomous Bougainville Government, led by former priest John Momis, has repeatedly stated an economically viable future requires the return of mining.

Rio Tinto has demonstrated its lack of confidence in reopening Bougainville Copper Ltd — which would cost an estimated $6.5 billion — by instigating a review of its 53.6 per cent stake, which has been under way for more than a year.

A groundbreaking ceremony, or Bel Kol (the cooling of anger), at which landowners, ABG, mine owners and other groups would bury the hatchet, has been postponed yet again due to the hostility of former combatants, some of whom retain their small arms.

It looks increasingly possible that Rio Tinto will walk away from the mine, which it was forced to close 26 years ago, despite it still containing copper, gold and other metals worth about $50bn and ­locals strongly backing its reopening at elections despite a hard core waving the threat of violence to keep it closed.

It could hand its shareholding to a trust for Bougainvilleans, as BHP did when it walked away from the environmental controversies at the Ok Tedi mine.

Or Rio could try to sell it, in which case the PNG government might be a buyer — or might ­nationalisation it, as happened at Ok Tedi two years ago. The ­national government is already the second largest owner of BCL, with a 19.1 per cent stake.

But nationalisation would be very hard to effect and counter-productive to the good relations needed for any chance of a referendum outcome supporting continued PNG sovereignty.

The bottom line is that only one source can provide the cash and the engineering required to resurrect the mine — the Chinese government. China is the only country to be expanding rapidly its aid — however tied — in the Asia-Pacific as part of President Xi Jinping’s maritime silk road ­vision.

Mr Momis, 75, a complex figure who has evinced strong nationalist feelings for PNG and Bougainville, has strong connections with Beijing, where he served as ambassador from 2006 to 2009.

Australia has worked to maintain strong links with Bougainville too, having played a major role, working alongside New Zealand, in the peace process and providing continuing aid. But the relationship suffered some turbulence when Canberra announced in the May budget the opening of a consulate on Bougainville before it had been fully agreed by Port ­Moresby.

Whoever becomes Bougainville’s best friend, whether it ­remains part of PNG or seeks to strike out on its own, must have deep pockets.

The stakes are also high, as Asia-Pacific waters, already the world’s most crucial trading channels, become increasingly crowded with the escalation of spending on ocean-going navies, including by Australia.

Bougainville has been a highly strategic island before. In 1943, it was where US fighters shot down Isoroku Yamamoto, the commander-in-chief of the Japanese Imperial Navy.

The Australian Strategic Policy Institute warned two years ago that “misunderstandings between Port Moresby and the ABG persist … The most likely referendum outcome — PNG refusing to ratify a clear but far from unanimous vote for an independence Bougainville is utterly unprepared for — would be destabilising”.

“Australian interests would be profoundly engaged if the situation there deteriorates sharply.”

ASPI director Peter Jennings added this week that the sharper maritime strategic competition emerging in the region made ­Pacific islands even more vulnerable to exploitation from powers eager to secure access for ships, aircraft and intelligence-gathering capabilities.