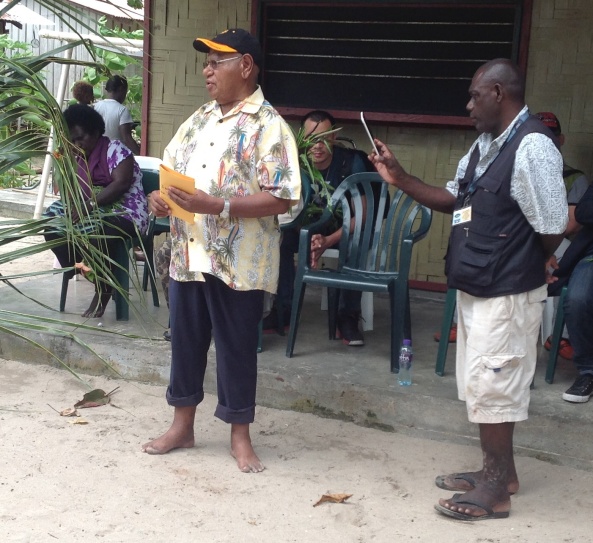 In his welcome Chief Peter Garuai of Pokpok Island told the President that his Island community was honoured and privileged by his visit, this being also his first to the Island.

It was an important visit, brief though it was, because it provided an opportunity for people in the community to see and meet their President face to face. Visits to communities by leaders are moments that people savour as they are occasions when people can hear from the Government as well as talk directly to the leaders like their President. 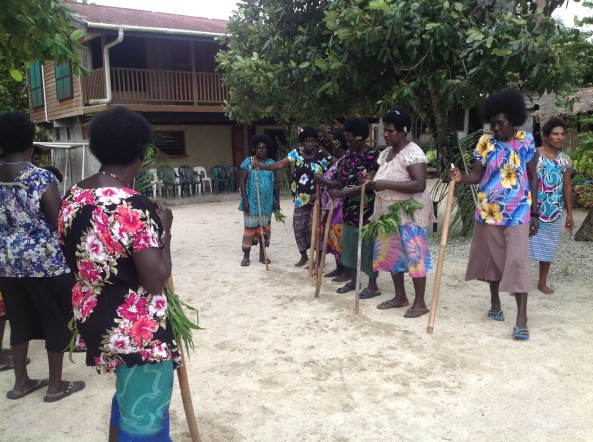 In a traditional welcome led by the village women elders the President and his main party were adorn with fresh herbal necklaces and anointed with fresh toronisi coconut oil. The President and his accompanying dignitaries took turns to help themselves to the local Nasioi delicacy tamatama that is offered to visitors.

Chief Peter Garuai told the President that any development in tourism on the islands and the benefits that accrue from tourism must be clean, lean and environmentally and people friendly with importance of conservation foremost in the minds of everyone involved. He said the islands are fragile and any tourist development must blend in with what the islands offer in terms of its pristine but fragile environment and must be always be in consultation with the population.

Chief Garuai said the potential for tourism must go hand in hand with the need and importance for conservation and said the local people are the expertise on protection and conservation on their islands. Everyone on the Island grows up knowing that they belong to the island and the sea. It  is a fragile landscape but it is inextricable connection which the people here have always been a part of, not separate from it.

Chief Garuai also explained how Pokpok Island was recently granted its long time wish to have its own Village Assembly (VA) which comprised the main village of Pokpok and  Sisirai and Uruna villages, a number of hamlets on the Island as well as a number of hamlets and settlements along Siipa bay on the mainland. The islanders settled on the name Metora Village Assembly for their VA, a name signifying communities dwelling along the coast and off the sea. The name Metora also behoves a sense of care and responsibility for an environment that is fragile and predisposed to the vagaries of open sea and unpredictable weather. It is  the name that is also given to coral sand islands and shoal formations on the outer reefs which people use as resting places while out diving or fishing as well as for initiations of young girls and boys before they can venture out to the barrier reefs on their own.

The Chief, Peter Garuai also pointed out that what is beautiful requires a great deal of thought and responsibility to care for and maintain. In this regard the threat of global warming is real for all islands like Pokpok along the coast of mainland Bougainville as much as it is real for the outer atolls. He mentioned government help was needed with materials for the islanders to construct sea walls to protect the villages on Pokpok, the main village in particular. Some of this has been started but government input in providing materials was urgently needed.

The chairperson and president-elect of the Pokpok and Metora Women’s Association Ms Mary Gula also welcomed President Momis and Mrs Momis on behalf of the women on the Island. She said that Bougainville was blessed with women leaders taking on roles for the betterment of women in society through their involvement as equals in decision making at leadership level. 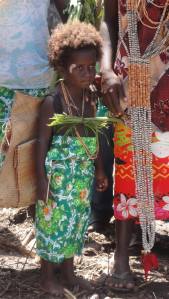 With increased demands for care and responsibility in the village women are also involved in many roles like never before. For this year the women’s association on the Island has embarked on a self-help project to build a women’s resource centre. The men are already involved in helping the women to realize this project and the beginnings of the project has also been supported with preparatory funds and leadership by the Speaker of Bougainville Parliament who is from Pokpok Island.

Ms Gula said women play a critical role of providing a steadying influence on the rapidly increasing young population on the Island and generally throughout Bougainville. She told the President any help that might be forthcoming from the government for the completion of the resource centre will be welcome.

The visit by the President was planned as a sight-seeing detour from the mainland by boat ride to interesting areas in Kieta Harbour surroundings and around Pokpok and Tautsina islands and to the once resort Island of Arovo. The Kieta Peninsula’s jutting beaches and Assio Bay and the sacred site areas of Eberia from the sea all offer very interesting sight-seeing tours by boat. Boat ride farther north towards Kobuan Bay is also the site of Pidia Village where Mr Pip was made on location.

In his response and remarks President Momis thanked the Chief, the women and the community for the traditional welcome. He said the ABG recognises the huge potential for tourism in Bougainville but it has to be developed in consultation and with the participation of its communities. He was very happy that the original owners here continued to protect and care for beautiful Kieta harbour and for the environment around the islands which supports their livelihood. He said any development by prospective investors in tourism must be done through thorough consultations and is meaningful and beneficial to local communities and must respect their traditions, cultures  and their natural environment.