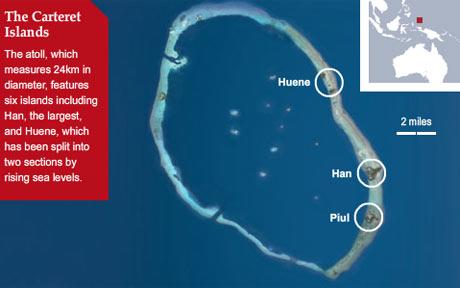 Good news for the people of Carteret Islands in the Autonomous Region of Bougainville.

The Carterets, home to the world’s first climate refugees, will benefit from US $30 million in development funding (approx. K88 million).

These funds have been made available through a partnership program between the PNG government, Asian Development Bank and Climate Investment Fund.

Carteret Islanders, as beneficiary to these funds, was made known, following series of questions from North Bougainville MP, Lauta Atoi, on the national government’s commitment to climate change affected island communities in the Autonomous Region of Bougainville.

While others have faced the challenges, Carteret Islanders, although being declared as first climate change refugees of the world, for far too long have silently suffered.

“Has the government got plans to address the specific needs of the Carteret Islanders and other atoll islands that are equally affected,” Atoi asked.

Minister responsible for Environment and Conservation and Climate Change, John Pundari, told parliament that the national government through the Climate Change Development Authority signed an agreement with the Asian Development Bank for funding support.

“I want to confirm to the member and the people of Carterets and other islands, that Bougainville has been identified as a pilot area. They will benefit from the funds,” he said.

Minister Pundari said funding has always been a challenge for the national government and thanked international partners such as the International Organisation for Migration (IOM) for their continued support.

“IOM are already at Carterets, working there, following a Memorandum of Agreement with the Climate Change Development Authority,” Pundari said.