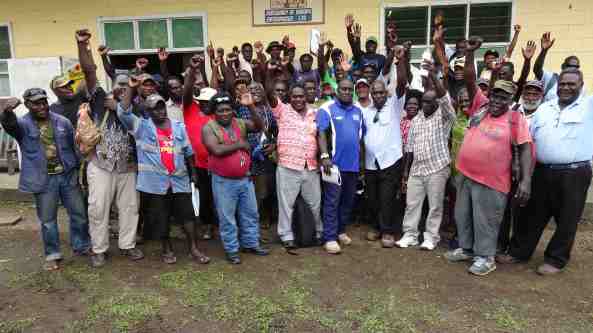 On Friday, the former Bougainville Revolutionary Army (BRA), Me’ekamui Government of Unity (MGU), Twin Kingdom Factions and the Me’ekamui Defence Force (MDF) signed an understanding to work together to pursue peace leading to the Bougainville referendum in 2019.

Picture above : Former BRA factions members (ex-combatants), womens reps and ABG representatives standing together to show their unification in working towards a peaceful process to referendum.

The meeting was conducted under the theme: ‘Re-Unifying Bougainville for a free and fair referendum.’

The factions met for four (4) days at the Goro Homes Village Resort in Arawa to recall the events that took place in Roreinang from the 25th – 27th of September 1997, which triggered the split in the BRA to different factions.

Those present at the meeting recalled the events of the ‘Roreinang Coup,’ especially;

The ex-combatants present at the meeting acknowledged their split and recognised the limited time they had available leading towards the appointed date of Bougainville’s referendum on June 15th 2019, thus making it their top priority to work together. 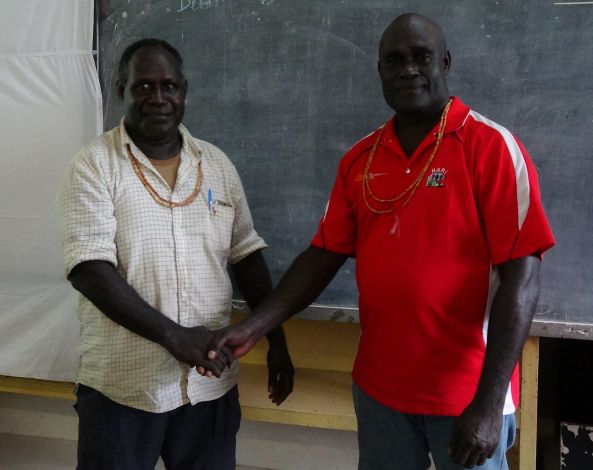 The signed understanding was to reaffirm their commitment to pursue peace by all means and make aware the importance of the unification process.

It was also a commitment to continue to the best of their ability to resolve the issues that arose from the ‘Roreinang Coup’ and further commit themselves to work in partnership with the Autonomous Bougainville Government (ABG) and the Bougainville Peace Building Program (BPBP) in moving the process leading to the Referendum and beyond.