Australian soldiers have cleared more than six tonnes of unexploded hand grenades and mortars from a World War II battle site on the island of Bougainville, east of Papua New Guinea.

The huge haul of munitions came in just the first week of Operation Render Safe 2014.

The Australian-led international mission is clearing potentially deadly munitions from the villages and food gardens around Torokina, on the west coast of Bougainville.

An Allied air base was built at Torokina by the US in 1943 and was the launching place for Australian ground attacks against the Japanese in 1944-1945.

More than 500 Australians died and 1,500 were injured in the Bougainville campaign.

Seventy years later, the Australian army has returned to clean up the deadly remnants of war.

With little infrastructure at Torokina, soldiers have landed vehicles on the beach and trekked into the jungle to look for unexploded ordinance.

Despite five months of awareness-building activities, there were criticisms of the munitions clearance by some former combatants in the more recent conflict on Bougainville.

Australia’s role on Bougainville is still a sensitive issue due to the civil war in the 1990s, sparked by disputes over the Panguna mine, operated by Rio Tinto subsidiary Bougainville Copper Limited.

“Former combatants have said that this operation is a breach of the Bougainville Peace Agreement, but I had explained to them that the operation… enhances the peace that the people of Torokina want,” said Patrick Nisira, vice-president of the autonomous government of Bougainville.

Australian army personnel said the reception on the ground had been friendly.

“The people of Bougainville have been most welcoming and we have been working very closely with them to identify explosive remnants of war which pose a threat to local communities,” operation commander Captain Jay Bannister said.

Members of the Bougainville Police Service and locals have helped soldiers locate the munitions storage pits, with assistance from explosives experts from the US, UK, Canada, News Zealand and Solomon Islands.

“As well as helping the community, this is a great training opportunity for the younger EOD guys,” Mr Austin said.

“For the past 10 years we have been focused on the Middle East region but this gets us back to the grass roots fundamentals of our job.”

The mortars and hand grenades were stacked in pits and destroyed by a controlled blast.

Following this MOU a support grant of FOUR MILLION KINA was pledged to support NBC Buka to reach the entire region.

According to reports gathered by New Dawn FM this is funded with TWO MILLION KINA by Department of Foreign Affairs and Trade (AUSAID) (DFAT).
The new radio CALLED “Radio PLES LAIN” will be launched at the BEL ISI PARK on November 6 and 7th, 2014.
They have been testing their signals in Buka on 98.6 Megahertz on the FM BAND.

Meanwhile New Dawn FM a local radio operating from Buka since 2008 has signed a grant deed agreement with the Australian Broadcasting Corporation to Produce, screen and distribute six awareness videos in Tok Pidgin language to raise awareness about missing persons, war widows, government corruption and the three pillars of the Bougainville Peace Agreement

The Torokina Community in South Bougainville have welcomed Operation Render Safe into their area and see it as a positive step toward development.

Apart from reservations raised by ex-combatants and some leaders the Torokina people when welcoming the dignitaries from the representative nations taking part in the operation expressed their gratitude to them.

On hand were the National Member for South Bougainville and Minister for Bougainville Affairs as well as the ABG President Chief Dr John Momis.

President Momis said that the help from the Australian Government as well as the other nations participating in the operation will create a conducive atmosphere for the people and the government to embark on new socio economic development. 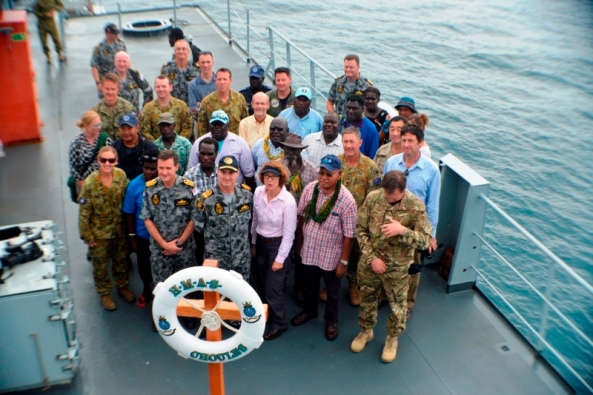 “I would also like to thank the leaders and people of Torokina for accepting the development into their communities and to allow this operation to create safer communities in the District.

“With the ABG’s aspirations to create a democratic government which is our primary objective, we also have to provide services for our people, with this being said services are not an easy task,” the President said.

The President added that Operation Render Safe will pave the way forward for development in the area.

The President’s sentiments were shared by Minister for Bougainville Affairs Steven Pirika who stated that for too long the people of Torokina suffered from the remnants of war left behind by the allied forces. 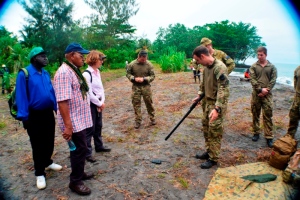 Minister Pirika said that move by the governments of the allied forces to remove the unexploded ordnances in the area is a sure sign of development and partnership between all the stakeholders involved in the operation.

Operation Render Safe is currently underway and involves military personal from Australia, the United Kingdom, the United States, New Zealand and police from the Solomon Islands.

The Explosive Ordnance Disposal teams from the taskforce nations have uncovered over 3000 landmines and bombs from WWII.

The EOD teams will be stationed along in Torokina for the duration of the operation and try to cover as much land area as possible.